In The Spirit Of Faris Odeh 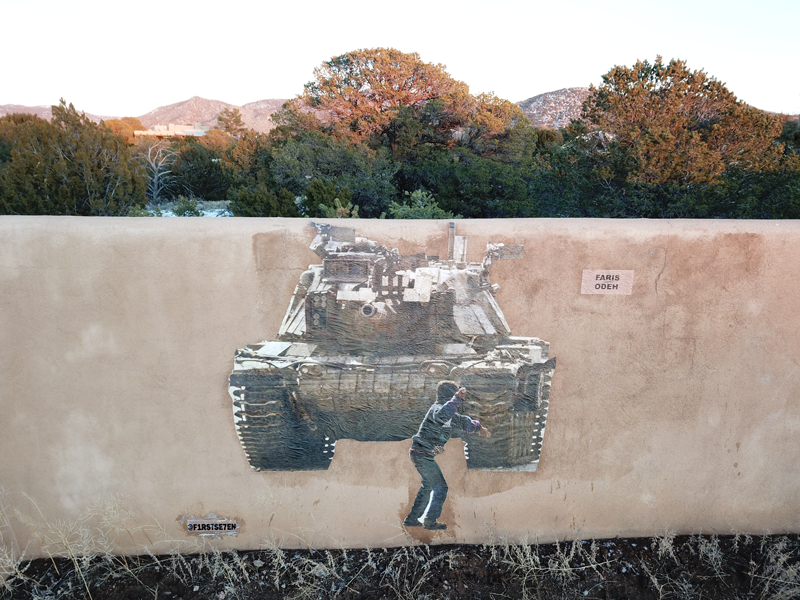 20 years ago I lived with a Palestinian family when 9/11 happened. It was at their dinner table of traditional food that laughter and sometimes tears would solidify our shared Indigenous struggles. It was at that very table where I was told the story of Faris Odeh, a young teenage boy who was immortalized in the pantheon of Palestinian martyrs alongside hundreds of thousands of others such as Muhammad Al-Durrah.

Fast forward 20 years and many movements under my belt later. I heard about a small Jewish group protesting the genocide in Palestine through a small city-approved sign on a wall along one of the busiest roads in Santa Fe, New Mexico. This particular route along the wall leads up to some of the most famous museums and galleries of Native “fine art” that Santa Fe is known for.

For almost 5 years this Palestinian human rights group has had its sign defaced, destroyed and even cut into by the knives of local zionists. These uneducated racists do not realize they live and profit from occupying Indigenous stolen land here too. Cameras have caught these apartheid advocates defacing images of Palestinian children under the cover of the night.

For all the Santa Feans who took knives to the images of Indigenous children, it is clear these poisoned apples did not fall far from their family’s proverbial hanging tree in terms of westward expansion. These actions are an extension of their own genocidal heritage and legacy on this continent.

Intervening with street art installations on adobe walls, which are similar to Palestinian walls, was an easy one. Street Art never has, and never will ask for permission so these installations are in direct opposition to the city of Santa Fe and its homogenized upper-class art institutions.

I understood long ago the task of a Movement Artist is to create images that unite people and movements for the continuation of Indigenous culture and lifeways. It is my opinion that any Indigenous art or associated movements that amount to gimmicks should be considered traitorous to the time and struggle of our own people, especially those currently on the frontlines. These types of self-serving clout chasers are nothing more than a melanated capitalistic hurdle against our collective liberation.

These wheatpaste installations were expanded to utilize the whole 150 ft long adobe wall instead of being relegated to the 4 ft sign space allocated by the city of Santa Fe. There are so many intersectional analogies in terms of the wall itself, the location and the shared Indigenous history so I wanted to make sure these stories of colonial terror were told in a life-sized fashion.

This project required living with these images and their associated stories for weeks on end in order to shed light on the ongoing genocide of Palestinians. In some cases, this included taking grainy videos from 20 years ago and enhancing them through different programs so that the terror of the victim’s last moments could accurately be conveyed.

Santa Fe and its zionists have continually tried to erase Indigenous struggle through the colonial tactics of “city codes”, especially when advocating for the human rights of Palestinians. However, Santa Feans need to be educated about what is really happening in Bethlehem, especially during the holiday season which is when this installation was deployed.

It was during the cold December weeks of creating this project that I learned more about Faris Odeh. The boy vs. tank. The David vs. Goliath. The image of Indigenous struggle which never left my head after all these years. I always knew I would do something for him but I never knew what that would be until this opportunity came along.

Faris Odeh would skip school to target state-of-the-art U.S. tanks bought by the Israeli Defense Forces (IDF) to kill his people and destroy Gaza. His mother knowing this would plead with him to not skip school. Even when locked in his room as punishment for truancy, he would escape through his bedroom window and climb down drains to be back out on the streets resisting – with stones.

What resonated with me more than anything was when his mother recalled of Faris, “It wasn’t the fame he loved,” she said. “In fact, he’d run away from the cameras.” She begged of him, “Okay, you want to throw stones? Fine. But at least hide behind something! Why do you have to be at the very front, even farther up than the older kids?” He told her, “I am not afraid”.

10 days after this famous photo was taken, it would be this tank that would ultimately take his life. He was shot in the neck by an IDF soldier from it. He laid there bleeding out for over an hour with medics not being able to respond because the US tank stood over his body preventing any help until he died.

This was an emotion-filled project not only from Faris’s story but the many others during this project, especially when unrolling these life-size printed images for the first time and seeing Muhammad al-Durrah. The Palestinian boy crouched behind his father in what was his last moment on Earth.

He and his father were caught in the crossfire of IDF snipers who targeted both of them as they hid behind a concrete barrier. [Video Here]

As hard as this project was to complete emotionally this is nothing compared to what our Indigenous brothers and sisters go through in Gaza and other settlement prisons on a daily basis. I have the privilege and luxury of walking away from the computer screen, the art and that life. They do not get to walk away from anything. Therefore their stories and experiences should remain, never to be forgotten.

When the children of Palestine like Fawzi al-Junaidi are caught resisting, the IDF will raid their homes and schools. They will kick down doors to snatch them from their loved ones at gunpoint. Palestinian children are disappeared into a system of cages to be interrogated and tortured. This same state state-sponsored terrorism is happening along the southern U.S. and Mexico border. In fact, the high-tech wall technology that has been perfected against the Palestinian people is now being imported from the IDF to the southern border.

What the average American does not understand is that Indigenous children in cages has been normalized on our continent since colonial contact. In order to secure gold Columbus separated families by keeping men and boys in cages as slaves to mine for gold quotas. Our girls and women were trafficked as sex slaves for his crew.

Not much has changed for the Indigenous of Turtle Island in over 530 years of a continued genocide. However, we still exist and in the spirit of many Indigenous warriors like Faris, we still resist.  Faris did what he did for the love of his people. He was not afraid. We shouldn’t be either.

This was for you, Faris. As long I live, so will you because you are me and I am you.

It is not anti-semitic to advocate for basic human rights. Never forget, you are on stolen land.